A feast for the eyes: GMS is now on Instagram . Check out my latest - and some not-so-latest - candid snaps of food, art, places, and other ...

1) West Coast jazz is more dependent on arrangements, whereas "East Coast" or "the rest of the country" is known for more improv and jams.

2) Being in the Golden State of Mind leads naturally - or unnaturally - to Hollywood.

3) Shakespeare rightfully described music as "the food of love," but that being said, boys and girls gotta eat.

All this was taken into consideration at a Celebration of Life for the late Dave Pell, who was instrumental (rim shot here) in creating the cool and sunny West Coast sound in the 1950s. (Amazing interview with Dave by Marc Myers on his blog, JazzWax, here.

What does this have to do with Girl Meets Soup? At the event, which was held at the AFM Local 47, the Musicians Union Hall on Vine Street in Hollywood there was a fabulous spread of sweets and savories, which at a typical memorial event, would salve the loss of a loved one and friend. In this case, however, the band playing Pell favorites like "Mountain Greenery" was the main course. As such, I missed out on the last deviled egg at the buffet, but made up for it at The Oinkster across the street afterward with a strawberry milkshake and an arugula salad.

There were three sheet cakes, decorated respectively with little plastic saxophones, music notes, and edible photocopies of Pell's album covers. A handwritten sign, propped up by a platter of dill pickles, olives, and crudités, proclaimed that, "These are a few of Dave's Favorite Things." 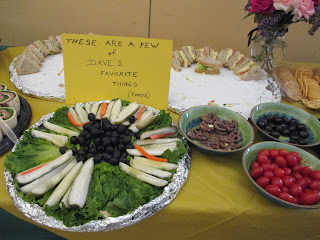 The band, which sought to commemorate the Dave Pell Octet, actually had nine musicians - ten if you counted the arrival of the imitable Jack Sheldon. Those who may not recognize his name would surely recognize his vocal work in the iconic "Schoolhouse Rock" series. Jack's was the voice of "I'm Just a Bill" and "Conjunction Junction," among others. The jazz community shakes its head in sadness today, remembering the robust, often bawdy trumpet player, who is now a shadow of himself after a massive stroke. He is now wheeled about by a caretaker, no less respected and loved.

Sheldon arrived at the Pell memorial amid a buzz of recognition, and gamely took the mike to eulogize his late friend and colleague as so many did after the band's first set - unfortunately, his speech was unintelligible. When the group - led by Carl Saunders, Pell's nephew and a monster trumpet player in his own right - resumed playing, Sheldon pulled out his trumpet, aided by his caregiver. Tentatively at first, he began to join in, playing his horn with one hand.

It should have been enough to just be standing there spellbound, as we witnessed this poignant sight. But in keeping with today's social media-crazy environment, we all groped for our phones - yes, the older people too - and began to video record and snap Instagram shots of Mr. Sheldon. 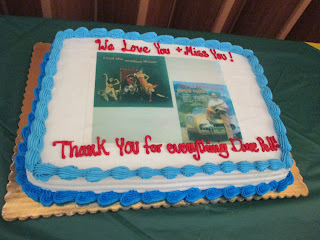 I could not help but think about the irony of it all. Friends of Pell's had created several continually looping slide shows of personal photos, album covers, ticket stubs, newspaper ads, and other memorabilia from Dave's distinguished and long career. He lives on in his ebullient arrangements of chestnuts from the Great American Songbook, played that day by the musicians from crumbling yellowed sheet music. He lives on in the family and friends who lovingly and joyously remembered him in tributes and through each other. Even an incapacitated friend and colleague was able to honor him with the highest tribute one musician can probably give another - interpreting his music.

Yet, these stories are disappearing daily. AFM 47 is actually re-locating to Burbank this month, the fate of the historic (at least, in my opinion) building, unknown. AFM 47 also faces another shrine of L.A. music history, Stein on Vine (moving story by Steve Lopez in the LA Times, here). The tiny hallway that leads to the union hall's restrooms is lined with photos of artists, many of whom enjoyed their greatest fame during my 1970s childhood and earlier, including Lalo Schifrin, Gerald Wilson, and Andre Previn.

You may be still wondering what this is all about.

I have recently embarked on a new literary endeavor - a book about the contributions of jazz to television in during the 1960s and 70s. Through the rose-colored lenses of my own personal nostalgia, I regard as the art form's (TV, that is) Golden Age. Armed with my love of music, my husband's extensive library of books and CDs, and even an adult school class on West Coast jazz taught by a former jazz DJ and UCLA doctor, I have gone where no Gen X-er has dared to go: into the living archive of "America's classical music."

I'll still be here at GMS - I am looking forward to my second year of Foodista's International Food Blogger Conference in September, and a trip to Chicago this month, with the requisite foodie fun! But I will also be establishing a new blog as the working "sketchbook" (a really hip sketch of the band that day by my friend and artist extraordinaire Shiho Nakaza), for my TV-and-tunes tome - please stay tuned!